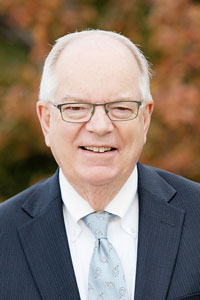 TOPEKA, Kansas (Oct. 8, 2014)— In late September during its annual meeting at the Maner Conference Center in Topeka, Newton attorney Thomas A. Adrian was honored by both the Kansas Bar Association and Kansas Bar Foundation for his service to the profession. The KBA recognized Adrian with his second Outstanding Service Award for his service to the legal profession. He first received this award in 2001. The KBF honored him with the Robert K. Weary Award at its annual foundation dinner.

The Weary Award recognizes “lawyers or law firms for their exemplary service and commitment to the goals of the Kansas Bar Foundation.” This award was given for the first time by the KBF Board of Trustees in 2000 and past recipients have included the Hon. Robert L. Gernon, Hon. Wesley E. Brown, Jack E. Dalton, Gloria Farha Flentje and John J. Jurcyk Jr.

Adrian is one of the founders and shareholders in Adrian & Pankratz P.A. in Newton. He graduated from Washburn University in 1966 with a degree in business administration and Washburn University School of Law in 1969. He moved to Newton in 1972, where he has maintained his current practice.

Adrian is a community leader and volunteer. He was chairman of the board of trustees at Newton Medical Center (1987-93), president of the Harvey County Bar Association (1990- 91) and a member of the Council of Finance and Administration for Kansas West United Meth­odist Conference (1992-2000) and president (1998-2000). In 1994, the Kansas Hospital Association named him Trustee of the Year, and in 1998 the Newton Area Chamber of Commerce named him Outstanding Citizen of the Year.

He is a KBF Platinum Fellow and served on the Board of Trustees from 1999-2005, including president in 2004. Adrian has been a member of the KBA since 1969 and a member of the Kansas Continuing Legal Education Committee since 1994.